Let’s get emotional. Well not like that. I’m talking emotional intelligence. Have you checked yours lately? If not, then you should. Why? Because it may be the key to unlocking your full potential as a successful entrepreneur or business owner.

Gone are the days of obsessing over IQ scores. Yes, IQ is important, especially if you are considering hiring professionals to join a software-focused digital startup venture. You want your team, especially software developers and technical specialists, to know a bit more than just their arse from their elbow (pardon the expression if you will). Star employees are hard to find.

But there’s a lot more to it than that these days. As well as the brains, we often hear how important psychology, state of mind, aptitude and attitude is when talking about success and achievement. And there’s a reason for that. It’s true. For one, you need to be in control of your ego.

And this is where emotional intelligence comes in.

It’s often stated that although having a healthy EQ score is helpful to your personal happiness, it can be detrimental to your professional career. Especially if you’re a startup CEO or new business owner struggling to get your venture off the ground.

Why is that? Because in short you may be too damn nice. And we all know what they say about nice guys (or girls) finishing last. To help support this, a recent HBR article highlights the skills that a highly EQ-driven, positive manager may lack. Such as the ability/desire to give difficult or negative feedback to employees. Or the courage to upset people and drive change, and the creativity to think outside the box.

Sound familiar? You’re not alone. But do not fear. These issues, or gaps, are not necessarily a result of your EQ. They simply represent proof that your EQ-related skills are, in fact, uneven. You need balance. As renowned scholars in the field Daniel Goleman and Richard E. Boyatzis point out, “in the model of emotional intelligence and leadership excellence that we have developed over 30 years of studying the strengths of outstanding leaders, we’ve found that having a well-balanced array of specific EQ capabilities actually prepares a leader for exactly these kinds of tough challenges.”

The trap to avoid is defining emotional intelligence too narrowly.

Sociability, sensitivity, and likability. These are often seen as the backbone of a healthy EQ. But they are missing some critical elements that may make you a stronger, more effective leader.

But let’s start at the beginning. For until relatively recently, emotional intelligence was an obscure concept. Researchers like Goleman, John Mayer (no, not the singer/songwriter) and Peter Salovey have helped put emotional intelligence in the spotlight. It’s now one of the hot topics in both business management and education – among other spheres. So, what’s the difference between IQ and EQ? Verywellmind define it as the below:

IQ represents abilities such as:

EQ is centered on abilities such as:

And for the more “visually-orientated” among us, here are Goleman’s 12 types of EQ, or EI has he prefers to call it: 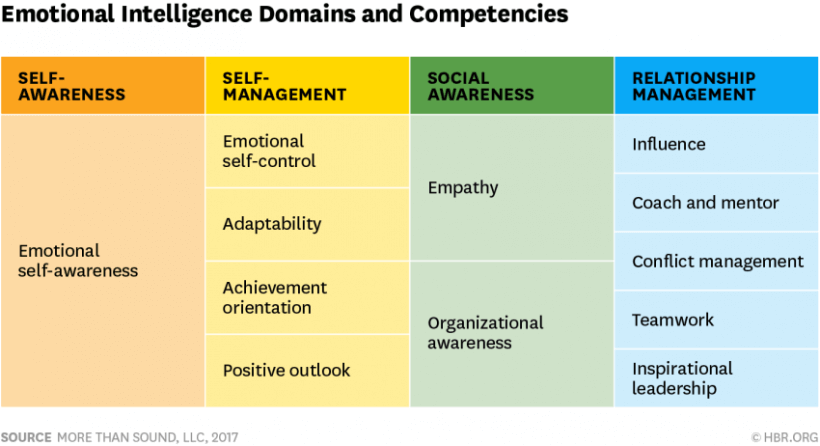 Obviously all of the above can both directly and indirectly help you in your professional life and startup ventures. But maybe too much of one of the other can also be dangerous. So, how do you know which ones from the above you need to work on? Messers Goleman and Boyatzis are pretty clear. Reviewing and testing.

For example, just by reviewing the 12 competencies in your mind can give you a sense of where you may need some development. To delve deeper there’s even a targeted personality test created by Yale University. It’s called the MSCEIT and it’s a commercially-available product.

Other ways to assess

Then there’s the well-known 360-degree assessments, as they are known. If you have ever worked in a corporation you may have already done one of these. And in fact have taken part in one to give feedback on a colleague.

It’s basically a questionnaire covering professional and personal traits, behaviors and attitudes. It collects both self-ratings and the views of others who know you well or have worked with you. This external feedback is usually a great help in evaluating all areas of EI, including self-awareness.

Interestingly, results of formal 360-degree assessments do not typically correlate well with IQ or personality. However, they are seen as the best predictors of a leader’s effectiveness, actual business performance, engagement, and job (and life) satisfaction. And, as Goleman and Boyatzis maintain, the larger the gap between a leader’s self-ratings and how others see them, research finds, the fewer EI strengths the leader actually shows, and the poorer the business results.

Whether or not you decide to use informal or formal methods of testing to evaluate your emotional intelligence, the main point is to actually do it. You will surely be in for some surprises. Perception is often said to be reality, and it’s a reality we often ignore.

The links between a strong EQ score and being successful in business are plain to see. If you manage to understand where your weaknesses are in that respect, then you can target it for improvement through coaching. You are never too important, too old or too high up in a business hierarchy to receive coaching.

Because even those with many strong leadership strengths or traits can improve the areas of emotional intelligence where there’s room to grow. Boosting your EQ means you’ll have more of a chance of boosting personal development, and your business as a result.