Talent versus skill. Skill versus talent. To be a successful entrepreneur, which is most important? The answer to this one is easy. Skill, skill, and skill again.

There’s a school of thought that says this: skill determines if you can do something, but talent reveals how well and how often you do something. My view is that the opposite is true. And it’s kind of aligned with the “Fresh Prince’s” emphatic view mentioned above.

Obviously it depends on what your talent is. But when we are talking about the business of startups and entrepreneurship, success boils down to learning. And that usually means how much you can learn from mistakes, then pick yourself up and get better. Or build-measure-learn as it’s put in lean methodology. It’s something we swear by at Starttech, and plays a central role in the Venture Building program we put our startups through.

Let me explain though. First, there are a few simple definitions which are important to distinguish the key elements – and differences – about talent versus skill.

Have a look at this simple chart, credit to www.keydifferences.com: 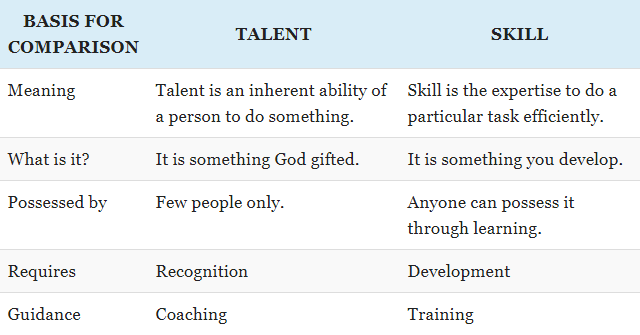 Pretty clear, right? In a nutshell, talent is something inborn. It’s there within you right from day zero, and very difficult to replicate. While on the other hand, a skill is something acquired, often over a long period of time, by anyone (in theory).

So bearing in mind entrepreneurship, or business success. Is this a talent somebody can be born with? I believe the answer to this questions is a resounding no. Why? Because in defining success in entrepreneurship, or any venture for that matter, you also need these things:

The last two of the above list are arguably the most important. And heavily linked to skill. Because through both of those elements you can increase and enhance your skill in any given objective – including entrepreneurship.

Going back to Will Smith’s quote, basically the idea is that no matter how talented you are, or much experience you may have in a given field, dedication and hard work are vital. It’s here you need to put in the time and show commitment to your craft.

You need a seed to sow

Many see talent as a seed. I like this metaphor. Because it’s true. Some people have it, some don’t. Of those who have it, the best “gardeners”, are those who end up with the grander plant. In other words, they reap the benefits of what they sow. Some of these plants are spiky cacti, some are beautiful flowers, some are tough vegetables. We aren’t all given the same talent in the same way.

But, crucially, we can each look after our seed, or talent, to make it grow. And this is where skill truly comes to the fore. Now I’m not saying you have to go full Malcolm Gladwell on it and try to apply the 10,000-rule. In any case, Gladwell himself has said that his work was misunderstood. But K. Anders Ericsson’s original idea of “deliberate practice” (which Gladwell’s musings are largely based on) is a solid path to follow.

The rationale? Easy. Those entrepreneurs who commit themselves fully to the trade, i.e. trying to build another business if their first one (or two, or three even) fail are more likely to taste success. In this way, entrepreneurship is more a skill that’s acquired, instead of an innate talent. Yes, there’s the personality cults of the likes of Richard Branson, Steve Jobs, Warren Buffet, and Bill Gates, among others, but their business success is not based on “talent” alone.

The above phrase is drummed into us all from a young age. And there’s a good reason for it. It can only help! And the idea that starting a successful commercial enterprise requires a lot of practice (and failing), has been recently highlighted by Stanford Graduate School of Business.

Research done by Professor Kathryn Shaw analyzed 2.8 million small retailers in Texas over a 22-year period. Her findings were eyebrow-raising. She found that the more experience and failures they had behind them, the more longevity they added to their operations.

Shaw’s research illustrates that this trend especially holds true for companies in the technology sector. Although there is a question mark here. Previous research found that serial entrepreneurs were more likely to be successful than first-time business owners. However, because a lot of the prior research focused on tech entrepreneurs — a world in which outside capital plays a huge role in the success or failure of a business — it has been tricky to tell the extent to which the experience of serial entrepreneurship itself contributed to the success or failure of second or third companies.

The moral of the story here is clear, though. Keep on learning. In any way your can. Nurture your talent, yes, but more importantly, hone your skills. Because it is through your skills that you will earn long-term, sustainable success as an entrepreneur.