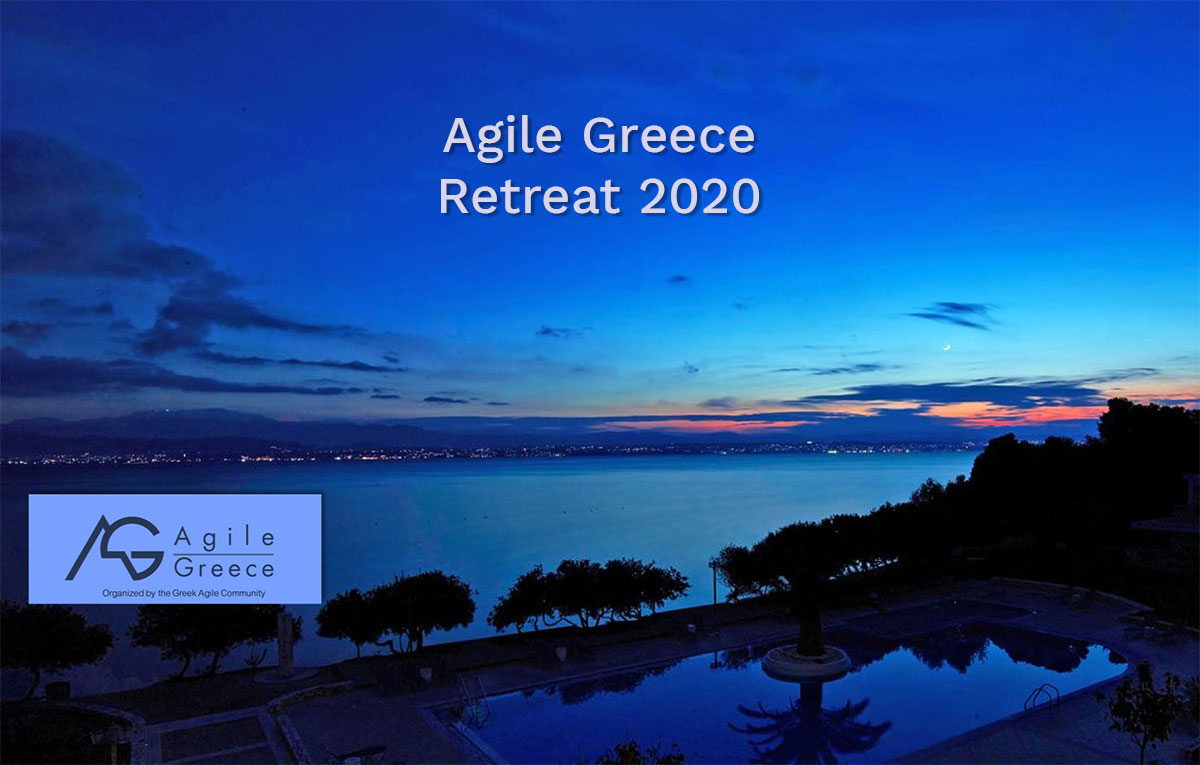 Agile Greece Summit is a well known international event/conference gathering world class agile experts. During this event, in September 2019, a friend and well known Agile Coach suggested the idea of an Agile Retreat. We had a quick and to the point chat about it, made sure we are on the same page, felt the enthusiasm sparkling in both of us about it, and agreed to follow up with one another.

Why a Retreat though?

A Retreat because we wanted to create an opportunity to immerse ourselves into what we love learning about, Agile, and make the most out of this experience.

With this in mind, and a few more great colleagues on our side, we set out to organize it.

We decided that the Retreat ought to be an unconference, a bottom-up organized event, where the agenda was going to be created by the attendees at the beginning of the event.

We also selected to organize it at a relaxed family-friendly setting outside the city, away from distractions and daily worries.

What we expected from this 2-day event was to get together in a context that is both comfortable and minimally structured so that we can dedicate ourselves to the subject of our shared interest. We aimed to exchange ideas, experiences, knowledge, and concerns around the Agile umbrella of topics, while creating bonds that would further benefit our collaboration within the agile community, especially since collective progress has a bigger impact to offer to the community on top of each individual’s progress than the sum of the  individuals’ progress alone.

Covid-19 was here before the event’s initially planned date and we had to adapt. Firstly, by postponing the Retreat from May to mid November 2020, and, secondly, once November was not an option anymore, by reorganizing it to be a virtual unconference.

Again, aiming for the minimal yet effective organization, we selected:

Agile Greece announced the 53rd meetup about 2 weeks before the event, and, as the days went by, more than 190 attendees opted in! This put a little stress on our shoulders to be honest, but a lot of excitement as well.

Preparations got quite intense as the date was approaching. On a Thursday night, 5 days before the actual event, some colleagues from various backgrounds volunteered to join us for a fun and productive rehearsal. We thank you for the laughs and the valuable feedback you shared with us.

A few more changes and another rehearsal later, here we are… November 24 2020, around 6pm, getting ready for action starting in less than half an hour, at 6:30pm.

An awesome and unplanned addition while waiting for the event to begin was the joyful background music one of the hosts started broadcasting to everyone in the zoom call.

Screenshot from the introduction activity to get everyone familiar with Mural.
More than 50 people show up!

At 6:35pm, and while some more people were joining, the initial introduction activity took place lasting less than 10’. Sharing a name, role, and a picture if you may, just so that everyone introduces themselves and familiarizes with the basic use of Mural.

Then, the agenda of the event was shared, and a walkthrough was thoroughly presented.

The agenda of the Unconference available on Mural

The next activity was the “Marketplace”, where each participant could write down one or more topics (s)he would like to suggest for the unconference. Then, we would have to collectively group them (if there were any common ones) and, last, vote for the ones we would like to discuss.

Around 30 topics were posted, and a few of them were grouped resulting in a total of 24.

The process of grouping topics was changed a bit on the fly taking into account an attendee’s feedback, who suggested it would be more effective if we started reading each topic and asking the participants to shout out if anyone had posted a similar topic that could be merged with the one currently being read.

Another attendee observed and shared with us 4 high level categories he identified that the topics created fell into:

Thank you for this insightful observation!

Once we had gone through the final list of topics, the voting phase was initiated. That only took a couple of minutes, and then the topics were distributed to the breakout sessions. We decided to distribute the most voted topics in different rooms, and interchange them in slots.

This meant that the first and second most voted topics were placed in different breakout rooms, and also in different breakout slots, so that it would be possible to attend both these discussions if one wanted to. At the same time, distributing the topics in such a way aimed to avoid “heavy traffic” in specific breakout rooms, something that would mainly be a burden for the facilitators of those rooms.

Having completed the Marketplace on time, we were now ready to begin the breakout sessions.

Some of the attendees had trouble joining the breakout zoom rooms, which was solved manually by one of the organizers who was also the host of the zoom meeting. This was a bit of a burden since the facilitation of the main room was on her plate too.

Discussions for me were kind of slower at the beginning of the 1st session than I anticipated, but as everyone was warming up, it got better and better. In the 2nd session the time-slot was just not enough, with more people participating in the discussion and noticeably willing to share their experience on the topic.

After the breakout discussions, as they were time-boxed, the whole group of participants was back in the main zoom room for the Summary part of the event. A presenter got 2’ to share with everyone else the highlights of their sessions. As the presentations were going on, it became evident that some very interesting discussions had been going on in each of the breakout rooms. The notes of each one of these have also been shared with the attendees in the page of the meetup event.

Last, but not least, was the feedback part of the unconference, in a “Rose, Thorn, Bud” format. A big thank you to all those who took the extra time (as we were around 10’ late) to share with us what they thought of the event. That gave us not only a lot of encouragement to continue, but highlighted also the next steps for improvement!

Some Data about the Agile Retreat

# 5 organizers & more than 50 hours of joint after-work collaboration on designing, planning and reviewing the organization of the Retreat.

# The Virtual Unconference happened to be scheduled exactly 1 year after the very first email was sent to the organizers of the event to initiate the group discussions for the Retreat.

# 198 people responded with “Going” to the 53rd Agile meetup invitation. Around 60 showed up. More than 45 stayed until the very end of the event.

# 30 topics were initially posted on the Market place, after the grouping was over 24 were available for voting, 4 main categories of topics were identified, each participant had 8 votes (⅓ of the total topics), and there was no limit on how many votes per topic per participant.

# At the end of the meeting, participants shared their valuable feedback, totalling in 30 Roses, 14 Thorns, and 17 Buds.

# Organizers’ energy level after the event was higher than before the event.

Agile Greece Retreat — How it evolved in the Covid-19 era was last modified: December 1st, 2020 by Vasilis Manolas