Something which began as a curious project for computer and technology “geeks” is exploding into the mainstream finance landscape. The rise of Bitcoin (along with several competitors such as Ethereum and Ripple) and Blockchain technologies is catching the attention of traditional investors. It seems everyone wants a piece, or “bit” (pun intended), of the digital currency pie.

Will it overthrow or replace the existing banking system? Perhaps its too early to make such radical conclusions. After all its volatile and complex nature make it a slippery prospect for “normal” investors. But as the world comes to depend more and more on the internet, one thing is certain. Cryptocurrency is here to stay.

Investing in cryptocurrency: what’s it all about?

There’s an explosion of information [and misinformation] out there about the Bitcoin and Blockchain revolution. But what’s the attraction for investors? And what investor profiles are investing in cryptocurrency?

I spoke with George Papageorgiou, a leading authority in the Bitcoin and Blockchain initiative in Greece and Cyprus, to debunk some of the myths and shed some light on the ins and outs of it all.

DISCLAIMER: This is a long one. So buckle in, and enjoy the ride.

Question 1: Hi George, thanks for joining us. OK let’s get straight into this. To all the novices out there (I include myself in that bracket), can you explain briefly what cryptocurrency and Blockchain are?

A1: So, since my specialty is Bitcoin – the first digital currency, let me quickly define that. It is essentially a decentralized, global digital currency and digital payment system. It’s a peer-to-peer system, with transactions taking place directly between users without a middle man, like a bank or formal organization. The transactions which take place are recorded in a public ledger called a blockchain.

Q2: How and why did they start?

A2: Well, as you’ll also find on Wikipedia, it was invented by an unknown person, or group of people, under the name of Satoshi Nakamoto. It was released as open-source software in 2009. So it’s 8 years old.

Q3: What is the current state of play with the bitcoin/blockchain community in Greece? Are there a lot of investors involved here?

A3: Well, its’s not easy to quantify the community in Greece. It’s more of a global phenomenon so generally it’s difficult to set any boundaries between where a local community stops and a global community starts. In terms of the discussions I have in the various slack groups and forums, I don’t see any boundaries in terms of geographical location. We have members from all over the planet. Bitcoin and the knowledge surrounding it, is what unites us. We all feel that we are part of something bigger, and that’s what it’s all about in this space. We feel very connected with what we’re doing.

Q4: And what are you doing exactly?

A4: I instruct the course Open Financial Systems at the University of Nicosia, in the first MSc globally on Blockchain Technology. This is a course that teaches conventional financial systems like clearing and settlement, securities and assets trading, insurance, accounting and much more, and how these systems could be improved, made more transparent and accountable through the use of native digital assets, generally known as cryptocurrencies and/or blockchain technology.

The value of investing in cryptocurrency

Q5: Back in 2009, the cryptocurrency market in general was not taken seriously and appealed only to tech-savvy and “geek” users. However, nowadays investing in cryptocurrency has exploded in terms of popularity, among people with all sorts of backgrounds and investment experiences. What is the attraction for investors in Bitcoin and Blockchain?

A5:
The attraction is simple. Bitcoin is valuable. Why? Because it is scare and useful. These two things are actually paramount for anything which has value. You need to have a level of scarcity and you can’t have infinite inflation as people will be disincentivized. There will only ever be 21 million Bitcoins. And that’s one of the beauties of this system.

Take gold for example, which Bitcoin surpassed this year in terms of value. There is a limited amount of gold on earth. As new gold is mined, there is always less and less gold left and it becomes harder and more expensive to find it and to mine it. Just as is true for Bitcoin. As time goes by, smaller and smaller amounts will be issued, regardless of the effort put in making (mining) them. (Let’s have a look at Bitcoin’s inflation rate and supply rate to put your comments into contect a bit George – Ed). 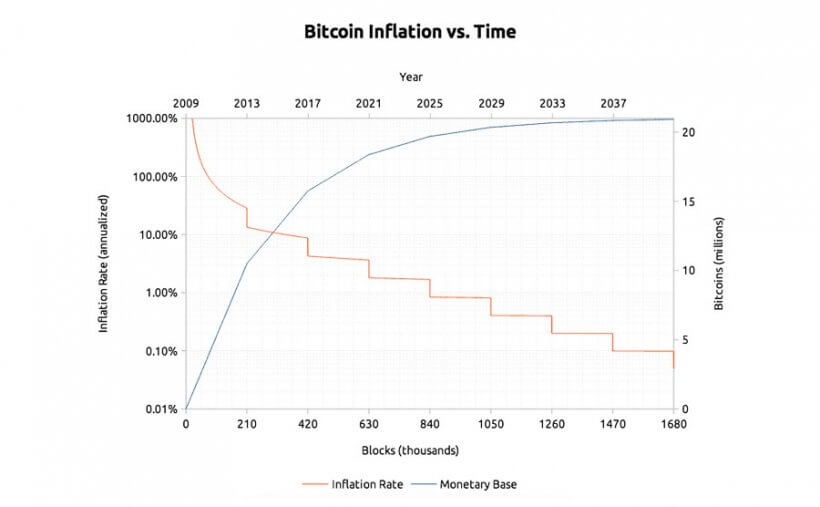 Q6: OK, that’s pretty crystal clear. So, Bitcoin is open to everyone and provides an exciting opportunity to delve into a completely new asset class. What kind of investor profile is investing in cryptocurrency, such as Bitcoin and Blockchain?

A6:
Look, Bitcoin and Blockchain are one and the same in terms of concepts. Essentially what began as a decentralized digital currency has ended up into a hyped-up model. Starting from way back, the first investors in this space were not investors in the conventional sense in that they didn’t pay money to acquire the first coins. And some are still following this policy. They are giving away their energy, or “work”, to acquire coins. Whether it’s electric energy in the form of mining, or intellectual energy in the form of explaining things or consulting services.

As the world becomes ever more reliant on the internet, it’s no surprise that Bitcoin, a secure and global digital currency has started to attract the interest of investors. Now, the hype which has been created – especially on social media – has created a more speculative, “traditional” if you like, environment which is attracting “normal” investors.

A6 continued:
Having said that, in terms of profiles, these investors are typically high-risk types. It’s still in an experimental stage and these experiments can be lucrative because they can go in the same manner that bitcoin is moving. So there are many incentives in jumping into this. It’s the hope that something that’s worth say 1 USD now, will be worth the 8,500 USD that each bitcoin is worth now.

Having said that, there are a lot of misconceptions, and many traditional investors are having trouble grasping the concept of the currency’s scarcity in the sense of how it exists in this digital space. Blockchain is helping in one respect is that it is a method to do what a centralized banking system does – to keep a detailed track of who owns what, and who’s spent what. This is essentially what the blockchain of Bitcoin manages to do for the first time in human history.

Q7: We know that it’s decentralized. But who controls the market in terms of deciding how many coins there should be, price, etc?

A7:
First, let me say, as many have said before me, that there is a tendency in the business and banking world for some to try to take everything that is unique about a digital currency – i.e. permission-less operation, no censorship etc – and shoehorn regular terms around it to try and serve existing business models. But it can’t work. The value of an open system will always be much bigger than any form of closed system.

If fact, Bitcoin provides such a solid and (shock horror) predictable monetary policy that it can be verified by anybody. Bitcoins can be sent from anywhere in the world to anywhere else in the world. No organization or entity can block any payments or close your account. It makes cross border payments possible, and also provides an easy way for people to escape failed government monetary policy.

If you have a centralized organization such as a bank, then there can be a case that an elite group of people in that organization can make the decisions but that is not the case here. Decisions are made via a largely complex system. I wouldn’t call it a perfect system because I don’t think it’s been tested to its limits yet. The maturity level is not quite there. That’s why investors are being careful and not overextending themselves.

We cannot accurately compare something that’s physical with something that’s digital in terms of the paradigm shift it represents in utility and ease of transportation. In the exact same manner, we can’t compare email to snail mail.
– George Papageorgiou on Bitcoin value exceeding gold.

Q8: As we mentioned, early 2017 saw what many felt as an important milestone: the price of bitcoin exceeded gold. How important is this landmark?

A8: What you’re talking about is just a psychological barrier really. As a metric it’s completely inconsequential. We cannot accurately compare something that’s physical with something that’s digital in terms of the paradigm shift it represents in utility and ease of transportation. In the exact same manner, we can’t compare email to snail mail. We haven’t had scarce digital assets before so it’s a new experience for all of us, investors, regulators, educators and businesses. It’s a psychological impact mainly, especially for traditional investors and the average man on the street.

Q9: It seems so simple to just buy these bitcoins and wait for the success to come. However, because of the fact that bitcoin availability is limited (mathematically), new cryptocurrencies based on ICO (initial coin offering) mechanics have entered the market. Some of these are worth eight-digit numbers. Are ICO’s the way to go?

A9: For me ICO’s are simply a different way to crowdfund a particular project. I think that’s the simplest way to describe it. We see momentum gathering, but all that glitters is not gold, and there’s several prominent failures already. You can invest some of your cash in purchasing a company’s digital tokens, this can be potentially be lucrative, but it also has substantial risk attached to it. One of the main risks involved is the very real possibility that the tokens you buy simply lose value compared to the ICO price. Some projects just die, while others can be delayed for months and even years.

Q10: What are the key trends of investing in cryptocurrency that we are likely to see in 2018?

A10: The world is trying to get on the Bitcoin bandwagon. I think we will see more mainstream adoption of Bitcoin and the according investment flows. Most technologies take around 10 years before they hit the mainstream. Bitcoin started around 2009 so in 2019 we could be seeing it really starting to mature. The interest from conventional finance and traditional investment channels is now there, i.e. from private equity and venture capital firms, derivatives exchanges, etc, as well as government interest. We already have more than 90 central banks who are looking at cryptocurrency in one way or another. It’s going to be an exciting ride.

About George Papageorgiou: George is a Bitcoin & Blockchain technology expert, teacher, researcher, investor and co-designer of the world’s first academic program on Blockchain (University of Nicosia).