The Athens Classic Marathon: “A test of endurance, which makes you question everything. Your self-belief, your stamina, your psychology, and your body.”

No, we’re not talking about getting through Christmas with your relatives. Or the pains of running a startup. Although in reality, the above statement can also apply to both of those as well in equal measure.

But alas, we’re talking about something else. Something more life-defining. Like running a marathon – literally. And not just any marathon. The Athens Classic Marathon in fact. All 42.195 km of it. All the way from the village of Marathon to the shimmering white marble of the historic and stunningly beautiful Panathenaic Stadium.

Indeed, running the Athens Classic Marathon is typically the uttermost goal for the majority of runners and athletes all over the world. It’s the event that makes people visit Greece even for once in their life just to run this historic race. And it is widely believed to be the toughest of them all due to its demanding hilly sections.

At Starttech and Epignosis, we sent a small team of runners into the fire to find out (at their own free will I may add). And they did us all proud, all crossing the finishing line of this year’s 36th edition on November 11.

Here are the race results of our brave team:

But numbers are just numbers and since we’re getting closer to Christmas it’s a great opportunity to share some of the thoughts of those who ran. Because who knows, maybe it will stir your own feelings and ambitions and give your inspiration for those New Year’s resolutions. 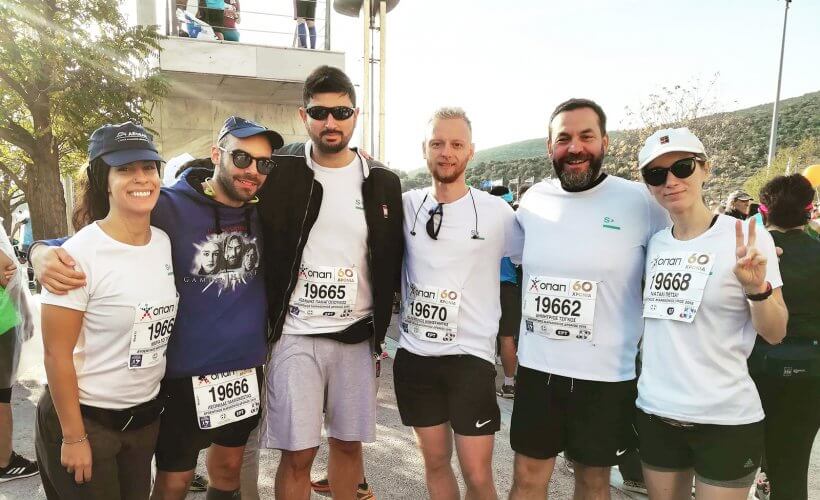 “Running a Marathon is a great life experience that everyone should do, but in my opinion, it’s all about the journey, not the destination… And the journey requires discipline! It’s not about doing the occasional big things, it’s about doing the consistent small things! Eating right, sleeping right, hydrating, skipping night outs and of course working out! Working out at least 4 times a week, not only in good weather but in rainy or hot days too, not only when you are feeling refreshed but also when you are tired or bored! So, as I said, I urge everyone to try a Marathon in their lifetime, but I advise them to be prepared to endure all the difficulties of the preparation!”

“Preparing for a marathon has helped me in many ways to improve my day to day life. First of all, being a member of the Starttech running team and sharing the same goal was the best motivation to start and keep going. Being under the supervision of Aris and his scientific approach made me look forward to each and every training session. In general, I had to re-evaluate what is really important and improve my time management. I have discovered that I enjoy audio books. I was looking forward to “digest” them on those long easy runs. It was definitely a positive experience that has made me stronger physically and mentally.”

Our Co-founder and CEO continuously tries to inspire all of us here in Starttech to run, bike, eat healthy, read and generally to keep us on the straight and narrow. A noble quest for anyone to take on. Dimitris does this in many ways but mostly in leading by example. So, this time leading the way, he decided to run a marathon for the second time in his life, and all of this within 2018. Quite a year.

Running his first marathon in Paris back in April, Dimitris said what experience was like in the quote that leads this article. If you missed it, or don’t want to scroll up, he said it was “a test of endurance, which makes you question everything. Your self-belief, your stamina, your psychology, and your body.”

Following this achievement up with a second run in the Athens Classic Marathon, Dimitris summed up his experience in the Greek capital with the apt phrase that

There can be no destination other than the journey itself.

I think many of us can testify to that in our own work and life endeavors.

Patrick is a sales executive at Epignosis. An expat from Canada who’s been in Athens for 3 years, participating in Athens Classic Marathon was a thrilling experience for him.

I remember hearing the story of Pheidippides as a kid”,

“I’ve wanted to do a marathon for years, so when my colleagues signed up, I just had to do it!

The most interesting part of his story is that he decided to run without preparation which turned out to be a lesson-learning experience for him as he warns us:

But since he dares to say that he’ll probably do it again— run a different marathon this time, as this mission is accomplished—well that says a lot about him. Well done Patrick!

Yiannis also works at Epignosis. As a senior software engineer he has definitely tackled many demanding tasks before, but this was probably the most challenging one. As he mentions, it was really difficult for him to continue when just about two thirds of the way his feet started to hurt.

Running without preparation was an extra hurtle for him but he didn’t quit. For Yiannis, as for many other people from Greece and all around the world, running the authentic marathon is a lifetime experience. Still thrilled by his own triumph, he simply sums up his experience as a testament to the adage that “Nothing is impossible”.

Natalie is a Customer Success Manager at Epignosis. She decided to participate when a good friend of her convinced her (it is unknown at the time of writing if they are still good friends :)). Devoting personal time for seven months on really hard preparation she joined Starttech running team. Here’s what she says:

When I crossed the finishing line, I was so happy that the race was finally over…and I was thinking that I will not do it again. However, now that some time has passed, I would love to run a marathon again in the future.

What she’ll keep from her experience:

The marathon is a mental game. Where your mind goes, your body follows.

Maria also works at Epignosis. As a customers’ happiness specialist she shares with us all the emotional atmosphere of the event:

But she also describes an emotionally charged part of this year’s course, which provoked a sorrowful memory.

she remembers crossing through the area of Mati, the area that was badly burned by forest fires in July and in which close of a hundred people lost their lives.

Maria was under Aris’ supervision—co-founder of sciencetraining.gr and remote trainer of Starttech—but because of an accident she didn’t manage to follow her personalized training program. With only one month preparation before the event she also joined the Starttech running team.

Inspiration comes above everything else, as she says. Being inspired by other people to run she found the strength to continue so she could pass it on to other people after reaching the finishing line.

As for the lesson learned from the Athens Classic Marathon experience:

Every time you take a moment to reflect what you learned, you find out that one simple but hard race has offered so much more.

Aris is the team’s motivator and coach. All our efforts probably made him a proud coach. Here’s what he said after the Marathon:

One of the coach’s biggest dreams, is to prepare mentally and physically his athletes, to do POSSIBLE what they seem IMPOSSIBLE… And that’s what happened with Starttech Ventures team

Our professional and life journey as a marathon

We often hear the phrase “it’s a marathon not a sprint”. It is popular because it resonates with life. There are ups and downs. It is a long haul. It’s definitely not easy, and some may need help while others may not.

On this blog we have touched on this topic before, specifically relating to life as an entrepreneur and/or working in a startup. Because there is no doubt that running a startup can, mote often than not, be like running a marathon.

When we asked our Starttech and Epignosis runners if they saw the similarities, everybody agreed.

Yes, any true accomplishment takes time and significant effort. You need to be dedicated fully.
—  Patrick

I would say yes. If you want to succeed you always need to develop yourself and listen to your needs to find a way to satisfy them. You set the limits. It’s strange how running is a personal battle but you need help from other people to manage it. I do not run a company, I work for one. I cannot show how good I can be without having the right people next to me. My team.
— Maria

There you have it. The Athens Classic Marathon is clearly a once-in-a-lifetime experience not to be forgotten. Perhaps it’s something you have in the back of your mind to try in 2019.

But the main thing is, whatever your New Year’s resolution, starting with striving for a healthy body and healthy mind is the only way to go if you ask us.