Being in Shanghai for the first time, I can’t help but be impressed by its economy and growth.

The first thing that gets you is the skyscrapers; they are everywhere, as far as the eye can see. This is a city that makes Manhattan look small in comparison.

It’s not my favourite kind of urban development ― I prefer places like Berlin or Stockholm, but, still, Shanghai is impressive by any standard. 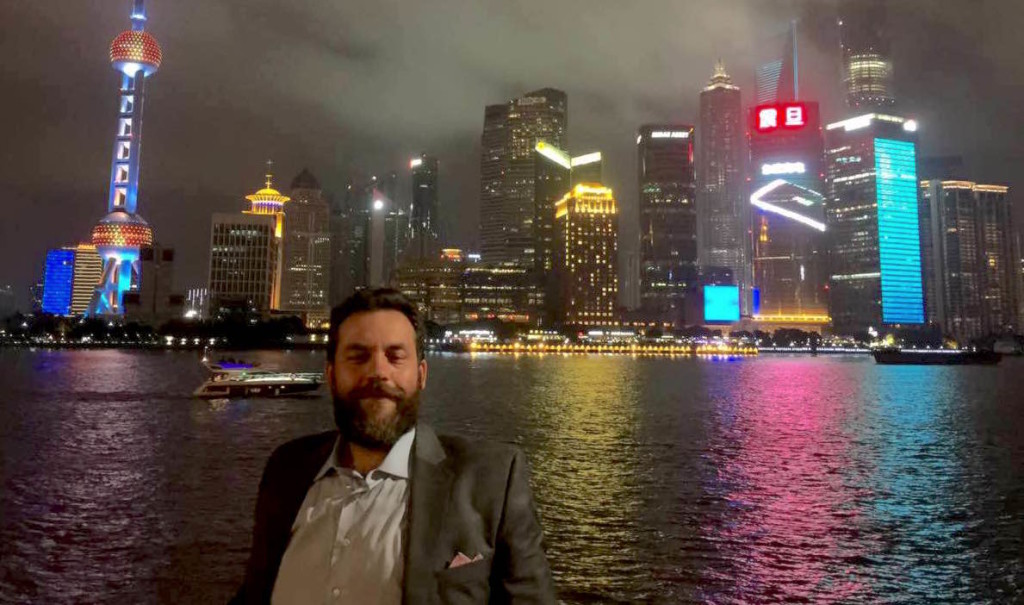 Obligatory photo of Shanghai’s skyline from the Bund ― sadly my professional photographer wasn’t available.
It’s just a two week trip, and I shouldn’t feel particularly homesick, but my thoughts are going back to Europe and its economic weak link, Greece.

Our small country follows me everywhere, even in Shanghai.

It’s on the TV news and on the newspapers. Business meetings start with small talk about the Greek situation and people stare at you asking “will you finally stay in the Eurozone?”. Everyone is talking about Greece, with an obvious concern and worry.

Not just in Shanghai, though. Over the last years, and especially during the last couple of weeks, major international media such as the NYT and WSJ kept publishing stories about Greece. Among reports on the progress of negotiations and doom and gloom scenarios, they have also published articles about the emerging Greek startup scene and the catalytic role it’s supposed to play in the efforts to get the economy of our (once?) historic country back on track.

Let me give you my unfiltered, straight-to-the-point, opinion on the matter: startups are as useful to the Greek economic recovery as ashtrays would be to motorcycles.

I’m not speaking as some head-in-the-clouds lefty that thinks “corporations are bad and that we should all return to barter and to growing our own food.

Quite the opposite: I’m among the pioneers of the Greek startup scene, having lunched my first startup at the age of 22 while still an undergraduate student (something extremely rare in Greece at the time — in fact it’s hardly common even today). I then went on to become a serial entrepreneur and early stage investor, involved in more than 15 tech startups, running an incubator fund and having recently completed my first international exit. On top of that, I’ve also been evangelising youth entrepreneurship for over decade.

However, talking about your country’s economy is not about sharing personal journeys, doing business marketing, or building arguments out of isolated examples. One has to be serious.

There’s a Greek saying “gaidaros me sella”, which roughly translates to “a donkey fitted with a saddle”. It’s used to make fun of an obviously weak subject that is attempted to appear more impressive through the use of expensive (but ultimately useless) accessories. I guess it’s analogous to what Americans would call “lipstick on a pig”.

And this is what startups currently are for the Greek economy in its present state: a nice, trendy, but essentially useless accessory.

Greece doesn’t need more start-ups; but it does desperately need many more scale-ups.

Back in September 2013 I was honoured to receive a Department of State invitation to take part to the “IVLP” program along with other 28 young business leaders from all around the world ― people from leading global powers such as France to new, emerging countries such as South Sudan.

In the context of the three-weeks trip, I was brought to Denver, Colorado, where we enjoyed a traditional far-west-style dinner in a local tavern.

Making small talk with the tavern owner, a guy who I’m not sure whether he had completed secondary education, I was extremely surprised to hear him talk about his business plan, quarterly budget and revenue targets, his marketing strategy, his suppliers management system, etc. This tavern owner in Denver was more business-literate and his business better organised than most of the Greek publicly traded companies and their CEOs.

The US, whether we like it or not, is a nation that not only speaks business but does and lives business. A successful US businessman, whether the CEO of a Fortune 500 company or a lowly tavern owner, is just awesome in doing business, having unparalleled execution skills and efficiency. And even unsuccessful US business people often have a much better grasp of business than most Greek business owners.

Greece, whether we like it or not, is at the other extreme; people are not taught to value business. They don’t like it simply because they’ve never learned doing business the proper way. And also because it has never been something that they’ve dreamt of doing.

Recognising this reality leads to an obvious prerequisite of an economic recovery: this nation has to learn to do business the right way.

In this context, little help will come, if any, from trying to have “world champions” (i.e. a VC funded startup making an exit offering a 10+ multiple to investors). What can really help is to get people in a “competitive sports” mode, where the sport is doing business.

We need better companies in all sectors and of all scales.

We need to do business in a better, more efficient, longer-term way. And, at the end of the day, we need to start investing, planning for payback periods longer than six months (the current average in Greek business investments).

The question of succeeding in business is not a question of innovation but a question of execution. Businesses in Greece have been extremely innovative – especially in financial engineering and tax optimisation. Where they’ve been historically notoriously weak was always in execution.

That’s why the country’s economy collapsed: not only because the public sector was slow moving and much larger than it should be, but also because the private sector mainly consisted of extremely inefficient companies with very poor execution.

Those scale-ups can come from the tech sector too, however they can, much more realistically, come from the “traditional” sectors of the economy which are way-less-sexy than “digital start-ups” for the press to write about.

The road to the Greek economic recovery is one of strong commitment, laser focus to quantitative targets and great business execution. Innovation will only be the cherry on top of the cake of success; and for that to happen we have to get busy baking that cake first.

Don’t let me be misunderstood. I love startups. I live and breathe startups.

This is what I know how to do, what I’ve been doing and what I plan to do for the rest of my life.

However, I recognise that when we talk about startups we tend to forget that the full expression is “startup business”. Startups operate in (and require) a proper business environment. In countries like Greece, people often talk startups but forget the business part.

We need to think more business. We need to build solid, strong business environment first, in order for successful startups to stop being anything but a rare exception. To make this happen, we should stop prioritising innovation and 10+ exits, and to start thinking about execution on a mass scale.

Else, we’re only putting the cart before the horse.

Of course that doesn’t mean we should stop building new startups, or that the Greek state should not support entrepreneurship.

Many of the people I met here in Shanghai plan to visit Greece in the future. My dream is that when they do visit Greece and return home, they’ll have stories to share not only of our unparalleled beaches and night life but also of our awesome businesses. Like I have for Denver, Colorado.

Ps. Special thanks to Professor Daniel Isenberg who, through his inspiring, eye-opening lectures about the “Scale Up” concept, really helped me, and numerous other entrepreneurs, to recognise the extremely high importance of execution in our efforts to improve and grow our businesses.